Vita Coco deserves great credit for creating a category that most thought would be a fad.

However, looking at this latest effort, one can’t be more disappointed. What’s the insight? Couldn’t get more generic if you tried.

A word on the branding: while I’m a huge believer in the gut, there are some wise words from Millward Brown that will always remain with me: it doesn’t matter how many logos or mentions you have; it’s all about how meaningful your brand is to the story. This one’s a case of ‘insert brand here’. Wish you hadn’t.

There’s a lot of chatter in marketing forums at the moment as the industry looks to reinvent itself. An obsession with ROI without the requisite tools to measure actual effectiveness over time is resulting in an array of different responses: ‘the <insert masterbrand colour> is where we get our ROI’; ‘why is the agency not getting that spinning product on the endframe is my ROI’; ‘TV still has the stronger ROI for mass brands but shorter timelength slots are the answer. 10″s. 5″s even.’; and the list goes on.

Sometimes one has to ask: Who. Cares?

Do normal folk care for what ROI you were able to deliver? Does their love for your brand stem from the angle at which your chocolate bar, or your coffee jar, or your toothpaste fly into the endframe? I doubt it.

Now, of course, that’s an oversimplistic way to think, but surely, surely winning with strong, engaging ideas, can elevate any brand to the grand old heights of ‘top of mind awareness’. Even a rehash of a decade long David Beckham showing off his midriff for H&M’s benefit can do wonders. I’m loving this:

There is little that can brighten the dampest, darkest and dullest of days like a genuine smile. Regardless of its cause, this simplest of gestures has had a long history of positive contribution to the world. The smile is almost a mini-superpower that we possess. Even babies can decode it!

Everyone wants their brand to be a source of happiness; gratification of some manner is in some form embedded in the purpose of brands. Oral hygiene brands have long played in the world of smiles – the sparkly, the flirty and the vibrant (we can probably all recall and associate with ‘Colgate smiles’). In this hypersocial-selfie-mad world, Listerine has just made a valiant attempt at the reinventing a way to own this space.

Through a modern channel, I think this is a commendable effort to take something so deeply emotional and turn the human truth about the response to a smile into an inspiring and deeply engaging campaign.

Having an impaired sense, even partially so, often results in a dramatic impact on the personality of people; I have seen the most jovial of close friends being socially disconnected as a result of this unfortunate eventuality.

My only hope is that this campaign is managed authentically and with a long term resolve and is more than a mere flash in the pan – there’s a big payoff from owning ‘smiles’ and do it right and you can fundamental add to the way of life of so very many folks. Not everyday you get to make difference with a chemically constituted product enrobed in plastic. Keep it up.

The telltale sign of the sharing economy beginning to experience maturity across markets in all senses of word is evident from their mainstream advertising. Although the early adopters and their buddies have provided a huge spurt of growth, continuing this sustainably is requiring tech companies to go beyond the often ‘fickle’ early adopter and to speak to the mainstream in a manner and in a channel appropriate to them. Enter emotional telly adverts.

Airbnb seems to have finally found that Marketing Manager they were recruiting long and hard for and the new strategy shows great promise. While the production is impressive, and the creative idea of curious faith in humanity feels like a great pivot, the actual execution of the advert is far from flawless. The construct is too familiar, and while that baby’s walk is mesmerising, the OTT soundtrack peppered with some creepy scripting leaves a mixed aftertaste. It’s good ownable stuff, although I’m yet to be convinced by the oversimplified tube ads ‘mankind’ which cause more confusion than intrigue.

Great effort either way and an inspiration to other tech-led challenges to embrace marketing as a complementary tool even when they have secured fantastic product leadership. Read: Tesla, Uber, Spotify – chop chop.

Seldom do you get the opportunity to work on a brand that allows you to lead with the heart. Core to this brand is the belief that it is authenticity and true unedited transparency that you need to exhibit if you want to have a fighting chance with the consumer of today.

There have been many highs (and some lows) on this journey, which I may share in time, but one of the professionally gratifying moment has been the making of this film, the first step of this project visible to the world – it’s been constantly challenging, boundary-pushing, full of organisational friction and leaps of faith, but.. man, has it been fun! Finally at the starting line.

Let me know what you think.

Football season is upon us, and so begins the Game before the Game: the ad battle for share of voice – sponsors wearing their badges with pride, and non-sponsors trying to find more creative ways to get in on the action. Coincidentally, The Game Before The Game is also the title of a five minute film from Beats by Dr Dre, Apple’s newest toy. And I think this one takes the cake in the run for pre-World Cup supremacy. Clever, up’beat’ (couldn’t help myself) and really fresh. Enjoy.

Renault’s building quite handy capabilities of creating weird and interesting (potentially viral) videos. This one involves Central London being turned into a life size Scalextric track. It’s not life-like given the dynamics of a real car, but equally not too Scalextric-like (we love the idea of those toys, but those crashes and constant dislodging off the track does limit its potential – or is that part of the fun!). I found myself sitting there thinking.. ooohhh how would a crash play out? Alas.

What’s interesting though is the reaction that it’s been getting. I’m not sure if it’s real or fake, but my, have people come out in hoards criticising it as  a con. 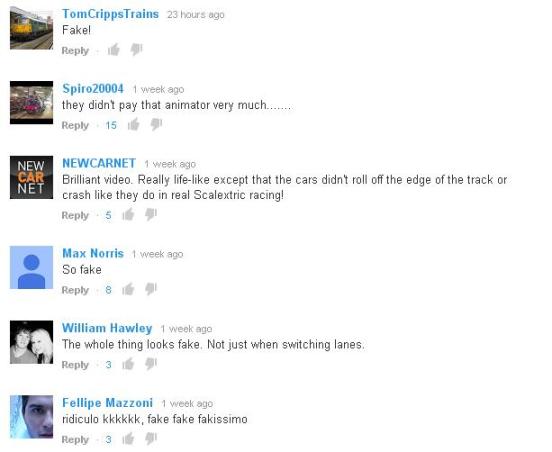 Perhaps a big lesson here around how authenticity and credibility trumps cool-factor?

For those feeling the temptation of such racing though, may I suggest an epic new alternative: Anki Drive! Time to get in on the future! (I’m fighting those kids for the first ones that land in the UK, I tell ya!)

What I’m about to share is possibly one of the most special pieces of advertising that I have ever experienced. And to my joyous surprise it has come from Pakistan! Google Pakistan [Update 14/11 below], who is your ad agency? The brief must have been rather simple, but the execution literally had me in tears.

The copy is in Urdu/Punjabi, and the subtleties of language are near-impossible to get across if you don’t understand it, which I think is a real shame. The world needs to know. This is very very important work. And much beyond a sheer brand equity campaign.

The first video is a story is one of a simple reunion between two close friends torn apart at the time of the partition of Pakistan from India – one of the bloodiest mass migrations in history. It’s incredibly close to my heart as some of my dearest, most amazing childhood friends originate from across the border. It comes at a time when Pakistan is warming up to the ideas of ties with India, something that I found to be pleasantly surprising in my most recent visit there. I do hope it will be reciprocal.

For the curious that must get even the watered down version, I’ve made an attempt at a rookie, translated script. The rest of the series has a more product-centric message, which can be found here.

Open to the sound of the call for prayer from the Grand Mosque (Jama Masjid) in Delhi.

Old man shows a picture of two boys to his daughter

‘This is me. And this is Yousaf. A great friend of mine he was’.

‘In Lahore, in front of our house, there was this big park..’

‘..The gate of the park was from the times of Adam (ancient)’

‘Every evening, we would be flying kites there’

‘And after that, we would go to Yousaf’s shop and steel jhajariya’

Man introduces girl as his granddaughter and she exchanges greetings with a friend.

Passes his phone to an old man.

‘Grandfather, there is a call for you from Delhi’

‘Hello’ ‘Yousaf Uncle’ ‘Who is this?’ ‘It’s me. Suman from Delhi. Your childhood friend Baldeep’s granddaughter’

‘Remember how you two used to steal and eat jhajariya?’

<Soundtrack about the carefree joys of childhood, and kites flying free like the birds>

Cut to the first pair sitting in a park.

‘At the time of partition, we came to India immediately’

<Soundtrack continues  – paper boats, ah the times those were>

<Girl in cabs asks driver to hurry up>

A bell rings, a door opens.

[update 14/11 – it’s since appears this is a Google India copy. Two lessons: 1. regional copies can be done very effectively. 2. A common issue and a yearning for peace resonates on both sides of this man-made border]

The last month has been a busy time with some inspired work coming out. This selection has had a lot of fame already, but I figure it was worth selecting my top three:

Having just had a horrific set of long haul flight on the Pakistan International Airlines, this video really elicited the gap between the top tear brands out there, and my unfortunate choice. I have no doubt that there are numerous unhappy Virgin customers too, but there’s a reason the brand commands so much affinity.

A great awareness campaign, executed in a truly novel manner. This kind of innovation linked to the platform is the reason Twitter is worth every penny that is it on the stock market!